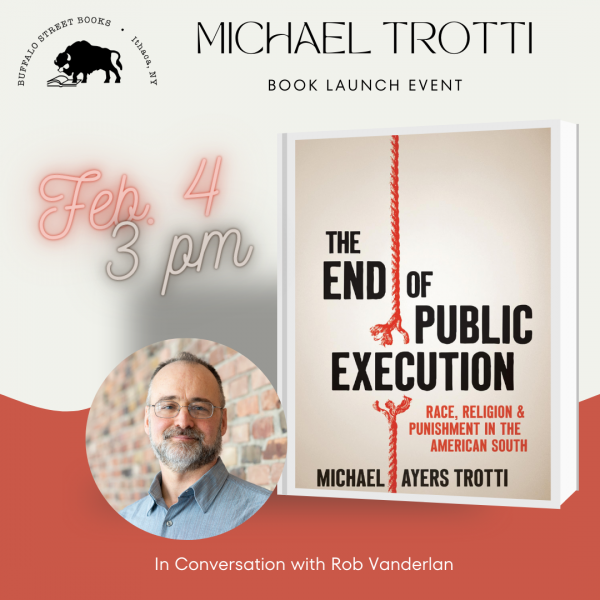 Michael Trotti is Professor of History at Ithaca College, writing on the history of the American South: its culture, press, crime, and punishment, as well as the horror of lynching.  His first book, The Body in the Reservoir: Sensationalism in the South, was a study of the press and murder sensations.  Just published this winter is his second book, The End of Public Execution: Race, Religion, and Punishment in the American South.  He is now beginning a project on the history of American Cash.

Before 1850, all legal executions in the South were performed before crowds that could number in the thousands; the last legal public execution was in 1936. This study focuses on the shift from public executions to ones behind barriers, situating that change within our understandings of lynching and competing visions of justice and religion. Intended to shame and intimidate, public executions after the Civil War had quite a different effect on southern Black communities. Crowds typically consisting of as many Black people as white behaved like congregations before a macabre pulpit, led in prayer and song by a Black minister on the scaffold. Black criminals often proclaimed their innocence and almost always their salvation. This turned the proceedings into public, mixed-race, and mixed-gender celebrations of Black religious authority and devotion. In response, southern states rewrote their laws to eliminate these crowds and this Black authority, ultimately turning to electrocutions in the bowels of state penitentiaries. As a wave of lynchings crested around the turn of the twentieth century, states transformed the ways that the South's white-dominated governments controlled legal capital punishment, making executions into private affairs witnessed only by white people.

About the Conversation Partner

Robert Vanderlan is the Executive Director of the Center for Teaching Innovation at Cornell University. He has been with the Center since its founding in 2017 in a range of roles, and has worked in faculty development for more than a decade. Rob has led teams that offer instructional design support for faculty, co-designed the Center’s New Faculty Teaching Academy, provided instructional design expertise for a range of Cornell’s edX massive open online courses, and helped guide the Center’s response to COVID-disrupted teaching. He received the Cornell President’s “Thoughtful Leader Award” in 2021. Rob is also a historian and the author of “Intellectuals Incorporated: Politics, Art, and Ideas Inside Henry Luce’s Media Empire.”

The End of Public Execution: Race, Religion, and Punishment in the American South (Paperback)

END_OF_DOCUMENT_TOKEN_TO_BE_REPLACED

If you haven't already, subscribe to our newsletter here.